Sancho Panza Cuban cigars is a high-quality Cuban cigar brand that started in Cuba in 1848 and is still being produced for Habanos S.A, a tobacco company owned by the Cuban State.

Sancho Panza Cuban cigars was named based on Don Quixote’s rustic squire’s character in the novel called ‘Don Quixote’ written by Miguel de Cervantes in 1605. In 1848, the term ‘Sancho Panza’ first became a Havana cigar brand, and Don Emilio Ohmsted registered it. [show_more more=Read-More less=Read-Less]The address of the original factory in Havana was 48 Angeles Street. In the 1880s, Ramon Allones bought the brand, and afterward, Rey Del Mundo Cigar Company bought it in 1940. On 15th September 1960, the factory and assets of Sancho Plaza became a state-owned company.

Currently, every Sancho Panza Cuban cigars are produced by the Cuban state is totally handcrafted from long-filler tobacco gotten from Vuelta Abajo part of Cuba. The brand is famous for having ranges of larger sizes, like the vast figurado Belicosos and Sanchos.
Also, Sancho Panza cigars are medium-sized, with a popular mix for its different and occasional salty taste that a lot of Havana enthusiasts like.

Don Emilio Ohmstedt, the originator of El Rey del Mundo, established Sancho Panza in 1848. The brand was so named after a major character in ‘Don Quixote.’ However, the brand was not big or well known, and it shut down in 1898.

In the 1900s, it was established again under a new owner and went through different owners several times, and then it came back to the Rey del Mundo Company in the 1930s. Later, in the 1940s and 50s, the brand started to thrive, especially in the Spanish marketplace.

Currently, Habanos S.A categorizes it under their ‘other’ category for their Portfolio brands. It gets an irregular Regional Edition release. 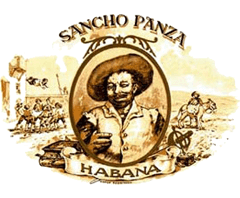