Cuban Cigars like this is light to medium-bodied cigar that have a pretty mild and subtle characteristics that has been their hallmark since their inception in 1844.

[show_more more=Read-More less=Read-Less]A great favorite among cigar aficionados, the history of this brand began around 1840, when Herman Upmann, a banker and almost fanatical cigar enthusiast, offered to open a branch of his family bank in Havana, Cuba.

In 1844, Upmanns invested in a cigar factory, and from then until 1922, the company operated as a bank and a cigar business. In that year, both companies failed, and a British company, J. Frankau & Co. saved the brand and ran the cigar factory until 1935. It was then sold to the newly founded Compañía Menéndez y García. And so a legend was reborn.

Characteristically, Upmanns offer a smooth, subtle, light to medium smoke. These cigars are excellent for beginners, but appeal to the daytime tastes of experienced connoisseurs. Their larger sizes are among the rarest and most sought after cigars in the world.[/show_more] 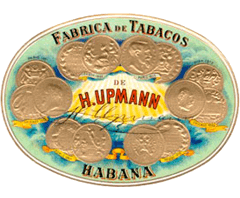