Romeo y Julieta  Cuban Cigars, inspired by the popular Shakespeare’s tragedy Romeo and Juliet has its Latin name as “Romeo y Julieta”; a marque that was founded by Inocencio Alveraz and Manin Garcia in 1875. Even before José “Pepin” Rodriguez Fernández (former head of the Cabañas factory in Havana), and his firm, Rodríguez, Argüelles y Cia, acquired the brand in 1903 (with made is exceptionally popular), the Cuban cigar brand had won lots of awards between 1885 and 1900 at different exhibitions.[show_more more=Read-More less=Read-Less]

Rodriguez was able to promote his brand successfully through traveling across Europe and America and entering his horse, which he named Julieta, in racing events.

His brand of Cuban Cigar became popular as it was mostly demanded by wealthy consumers who only liked personalized brands of Cuban cigars. The branded at this time also specializes in figurado cigars, such as perfectos and pirámides, which was produced in thousands of such shape.
The brand’s most popular devotee was likely Sir Winston Churchill, and this led to naming the flagship vitola of the brand in his honor. The long 7″ by 47 ring gauge cigar known as the Churchill (Romeo y Julieta Churchill). Other famous cigars Romeo y Julieta short Churchill,  Romeo y Julieta Wide Churchill, and Romeo y Julieta Belicosos.  Romeo y Julieta Cuban cigar is classified by Hebanis as a Global brand and has a major market share. It is a current pre-Revolution brand, and the range was fully established in 1875 (this is the year that the Aniversario Humidors date from).
The range comprises of medium strength cigars, and tobacco from the premium Vuelta Abajo region are used. Though until the 1980s all cigars were pre-1960 released, there was still some special packaging available till they were discontinued in the 1980s. The commencement of special packaging however got in place in 1999 with the inclusion of Romeo y Julieta cigars in the Siglo XXI Humidor.[/show_more] 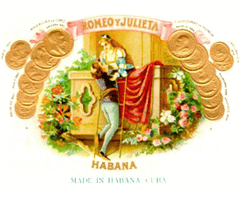