Quintero Cuban cigars was initially produced as Quintero and Brothers or Quintero y Hermanos in 1924, in Cienfuegos town, Cuba, where Agustine Quintero and his brothers started a small cigar company and started making handmade cigars. [show_more more=Read-More less=Read-Less]Cienfuegos is situated close to the Vuelta Arriba of the Remedios tobacco-growing region; it is found in a city on Cuba’s southern coast. Quintero cigar is among the small number of cigar brands that are not created in the center of the central tobacco production region of Vuelta Abajo.

The Quintero brand thrived quickly in Cuba and abroad, and then the Quintero brothers produced different sizes for cigars. Quintero y Hermanos started a giant rolling factory in Havana and began to use premier tobacco from the Vuelta Abajo area in the 1940s. The brand grew continually in sales and was popular, especially in Spain.

The Quintero brand became repositioned as a powerful machine produced cigar after Cuba’s cigar industry was nationalized by Fidel Castro in the early 1960s. Many hand-produced sizes were abandoned for hand-finished or machine-made cigars with short filler tobacco often sold in tubos or aluminum tubes. Quintero was the only machine produced Cuban cigar brand to be sold globally by Habanos S.A. Like before, a big chunk of Quintero products was shipped to Spain. Unlike other Cuban cigars, Quintero cigar has an herbal flavor and sweet aftertaste in the mouth. Quintero cigars also have the advantage of extra months of aging before they are smoked.

Habanos S.A., a marketing organization of the Cuban government, stopped producing machine-made cigars for handmade ones in 2002. This Quintero cigar line went through a total revamp and now offers four various sizes made at the Cienfuegos factory.

The Quintero cigars are hand-produced using a short-filler like Tripa Corta mix of tobacco leaves from Semi-Vuleta and Vuleta Abajo areas of Pinar del Río area in Cuba. Also, the cigars are medium-full strength.
The roller mixed sliced tobacco leaves and turned the filler to whole length binder leaves using a flexible mat set to create a bunch, with the wrapper usually applied by hand.

Quintero was established around 1924 and is a modern pre-revolution brand. The full name of the brand is Quintero y Hno or Quintero and brother.

Habanos S.A. classified it as a Volume-based brand. The brand consists of cheap and low-quality handmade cigars, with short-filler tobacco gotten from the Semi Vuelta and Vuelta regions.
The Quintero is usually of medium strength.[/show_more] 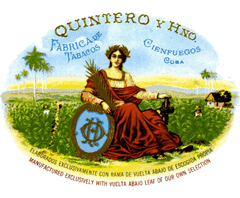