Quai d’Orsay Cuban cigars is the product name of a top cigar brand, manufactured for Habanos S.A. on the Cuba Islands. Cubatabaco created the Quai d’Orsay Cuban cigar brand in 1973 for SEITA, a French state tobacco monopoly. It was mixed to have French tastes, as a milder brand. Several opposing stories exist to define what the brand name means. One states that it refers to the popular Paris avenue. Another says that it talks about the French Foreign Ministry located there; another states that it relates to the SEITA headquarters located in the same street.

[show_more more=Read-More less=Read-Less]Quai d’Orsay Cuban cigars was not within the Habanos S.A. umbrella for some years and was directly managed by SEITA and Cubatabaco. However, based on the packaging, documents of Habanos S.A., and SEITA’s merger with Tabacalera in the multi-national tobacco company of Altadis, it seems that Quai d’Orsay has become a component of Habanos S.A. like other brands of Cuban cigars.

An additional peculiarity of the Quai d’Orsay line is the Corona cigars. Before the late 1980s, Quai d’Orsay produced its Coronas in two distinctive wrapper shades: Claro and Claro Claro. Because the trend for lighter wrappers reduced and customers discovered they were paying a lot for identical cigars with only a slight difference in the wrapper, there was a closure on the Coronas Claro Claro production. Even though the box has Coronas on it, Coronas Claro remains the authorized production name.

Quai d’Orsay is a modern brand set up in 1973 and became available in the market from 1974. The brand motivation stems from Valéry Giscard d’Estaing, a former French Economy, and Finance minister, and later President.
He recommended a light flavor cigar paired with French products such as foie gras and champagne. Ultimately, a French tobacco cartel (SEITA) approached Cubatabaco with the idea. The brand name stems from the quay and street where SEITA’s headquarters is located.

The brand was a classic example of a native brand that was focused on the French marketplace. However, this changed around 2005, when the volume of production and global availability increased.
The brand went through a revamp, with innovative band and box designs, with modern cigars added to the brand.
Habanos S.A. categorizes the brand under the portfolio brand’s ‘Other’ category. The range contains light strength cigars with tobacco from the top Vuelta Abajo region.[/show_more] 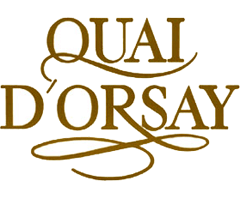