Jose Gener, formerly a leaf producer and eventually became the founder of one of the largest Cuban cigar factories on the tiny island of Cuba, which began manufacturing the renowned Hoyo de Monterrey Cuban Cigars, brand in 1960.

[show_more more=Read-More less=Read-Less]The “Le Hoyo” series was introduced to the commercial cigar market in the mid-1970s. The name translates approximately as “the valley of Monterrey,” which is an area of particularly fertile land in the “Vuelta Abajo” region of southwestern Cuba.

Gener cultivated in this valley for many years in the late 19th century.
Known by all cigar connoisseurs for its distinctive taste, silky richness and complexity of flavor, the Monterrey Double Corona is perhaps the most coveted and sought-after Cuban cigar. Some believe that “gold” really does grow from the ground! Produced in seven factories, the Hoyo and the magnificent Hoyo Double Corona are made with the finest Cuban tobacco.[/show_more] 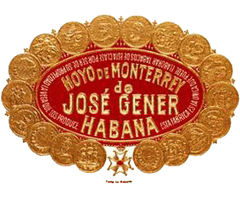