Simon Bolivar was one of the significant historical figures of the 19th century who freed much of South America from Spanish rule. The Bolívar Cuban Cigars was conceived in 1902 and based in the Partagas factory in Havana’s heart.

[show_more more=Read-More less=Read-Less]It is perhaps unexpected that a cigar named after such an influential figure should be mixed to match its power. Bolívar Cuban Cigars is one of the most robust and most full-bodied Habanos. It has an unparalleled richness of flavor in its mixture of Vuelta Abajo zone filler and binder tobacco that delivers one of the most sought-after brands among seasoned smokers.

All sizes of Bolívar are Long Gut, Totally Hand Stuffed – long filler, totally hand made. It is the brand chosen by enthusiasts, who like intense flavors.[/show_more] 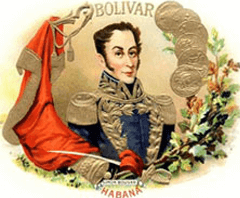