Saint Luis Rey Cuban cigars is a brand name for a top-quality Cuban cigar brand that was made in the 1940s. Currently, it is being produced for Habanos S. A., a Cuban state-owned tobacco company.

The Saint Luis Cuban cigar brand is presumed to be based on the famous novel titled “The Bridge of San Luis Rey,” written by Thornton Wilder, an American author. [show_more more=Read-More less=Read-Less]The Zamora y Guerra Co initially registered the brand in Cuba. The Zamora y Guerra Co was situated at 810 Calle Maximo Gómez in Havana. Later, two English tobacco importers, Michael De Keyser and Nathan Silverstone registered Saint Luis Rey in 1940. On 15th September 1960, the Cuban government became the Saint Luis Rey factory owner and its assets.
The brand was solely marketed by NK Silverstone Cigar Ltd in the UK market from 1960 till 1992.

Briones Montono factory, Havana, produces the Saint Luis brand, and it is the place that Romeo y Julieta is also produced.

Saint Luis Rey, an exclusively Cuban production, are handmade from long-filler tobacco gotten from the Vuelta Abajo region of Cuba. One special quality of this brand is the Lonsdale size, which Frank Sinatra loved. Sancho Panza cigars are usually of mild or medium-bodied strength within Cuban cigars.

Saint Luis Rey was established by a British firm around 1940 before the revolution. Up until 1993, it was solely imported into the UK.
The production volume was usually small, and from the early 2000s, the line decreased to one cigar produced for copyright reasons.
Until the 2019 marketing classification system was introduced, the Saint Luis Rey brand was often seen as a local brand that only had an interest in the UK market.

The current system classifies it under the other category of collection brands. It also gets an infrequent regional edition release.

The range has full strength cigars, with a mix of tobacco sourced from Semi Vuelta and Vuelta Abajo regions.[/show_more] 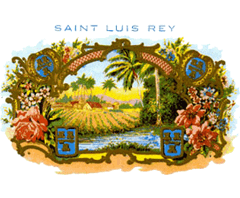